Ubuntu retrieves packages from a package repository. These repositories are mirrored by several hosts on the internet. Even though the security pocket is also mirrored, you aren’t supposed to use it to avoid mirror delays in your security updates. I wasn’t aware of this, and I discovered that I was using a mirror that was running behind, resulting in missing security updates for over six months.

When I tried to install perl in a Docker environment, it complained that the packages perl and perl-base were incompatible versions. At first I thought this to be a bug in perl, but closer inspection made it clear to be a problem with the security repository.

I have some Docker images which I use for development. By base Ubuntu is based on the Ubuntu image from Docker Hub. When I build my Apache image, this happens:

So perl-base is installed from another source as the perl package. That these two packages were incompatible indicated that the mirror did not serve the correct version. Switching mirrors solved the problem.

When I looked at the xenial-security repository, it seemed that the last update was in June 2017. 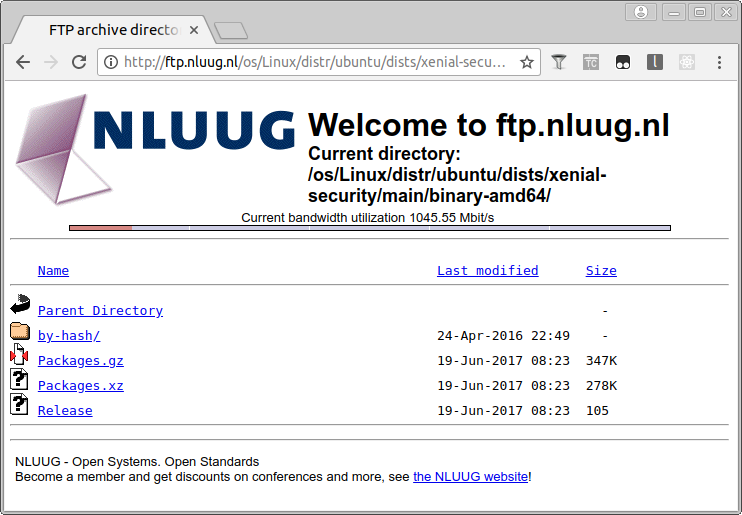 This means that when using this mirror for the security pocket, you didn’t receive security updates since June 2017. This has been resolved on February 2nd 2018.

Are there any other mirrors that are behind in their security updates? Let’s write a script to find out. Using Python we retrieve the mirror list and using BeautifulSoup we extract all links with the text “http”:

Then, we walk through this list and get the directory listing for the xenial-security directory. We use the htmllistparse module to parse the page:

This results in quite a few out-of-date mirrors. The following were last updated in 2016:

Even if you upgrade regularly, you may miss security updates if the mirror you use doesn’t work correctly. This can remain unnoticed for quite some time. That’s why you should use security.ubuntu.com and not some mirror for the security pocket, as described in the Ubuntu Security Team FAQ:

While packages are copied from security to updates frequently, it is recommended that systems always have the security pocket enabled, and use security.ubuntu.com for this pocket.